Economics in One Lesson

I just read the excellent ‘Economics in One Lesson’, by Henry Hazlitt.  Written more than fifty years ago, it is just as readable and relevant as if it had been published last week.

He starts out by arguing that the reason Economics is haunted by more fallacies than other areas of study is because the world is full of groups who have a direct interest in arguing plausibly and persistently for policies that will benefit them at the cost of others.  Unlike an objective field such as physics or mathematics, there are no end of individuals and groups who are intentionally trying to confuse the general public on the subject of economics.

Hazlitt’s primary lesson is this: “The art of economics consists in looking at merely at the immediate but at the longer effects of any act or policy; it consists in tracing the consequences of that policy not merely for one group but for all groups.”

What amazed me reading the book is how up-to-date it sounded.  The policies and politics he discusses – strikes, tariffs, industry bailouts, interest rates, taxation, minimum wage laws and protectionism are precisely the same policies that are discussed today.  And the positions he argues against are just as prevalent today as they were in 1946.

The book is freely available at http://www.fee.org/library/detail/economics-in-one-lesson-pdf-doc-audio, and I heartily recommend it.

For a lighter presentation, though surprisingly comprehensive, I also recommend this Hayek vs Keynes Rap Anthem, and Keynes vs Hayek Round Two.

What do you do once you’ve sailed single-handedly around the world and been made a Dame Commander of the British Empire?  Why, you re-design the world economy, of course, and talk some of the biggest companies in the world into getting on board your vision.

Pathological consumption has become so normalised that we scarcely notice it.

“Bake them a cake, write them a poem, give them a kiss, tell them a joke, but for god’s sake stop trashing the planet to tell someone you care. All it shows is that you don’t.”

George Monbiot points out the absurdity and the cost of our obsession with consuming plastic junk to mark the season.

And a gravity-powered lamp for developed nations that’s cheaper than burning kerosene.

We’ve added some tracks to our music page, check it out!

I’ve also moved music hosting to soundcloud, a very cool service for hosting sounds and music.  Kinda like Vimeo for the audiophile.

The greatest triathlete of all time makes her retirement official, having nothing left to prove.

“The privatized, for-profit prison industry is particularly plagued by a conflict of interest at its core” – an amazing story of how ex-offenders are engaging in shareholder activism to transform the prison industry.

Memory can be a powerful motivator to work for peace.  How a peace church handles Remembrance day.

Last month I wrote my first novel.  One of the most interesting things that I learned from this process was that stories all tend to share certain form.  At the heart of nearly every story is a conflict.

The story starts when something causes the world to go out of balance.  The protagonist, then, must work to bring balance back to the world, while the antagonist opposes him at every step.  Without this conflict, there is no story.   Indeed, we MUST have an antagonist for their to be a narrative.  Harry Potter is defined by his struggle against Voldemort.  Frodo is defined by his quest to rid the world of Sauron.  The soldiers in Band of Brothers are defined by their struggle against the Third Reich.

Because if there is no struggle, there is no story.  Who would watch a movie about a guy who wakes up to find that he hasn’t lost his job, an enemy he thought dead has not suddenly re-appeared, an alien race has not started destroying cities, the love of his life has not just vanished?  Who would read a book about someone whose  defining struggle of his life is deciding where to have lunch?

So, if you were writing the story of your life, with yourself as the protagonist – ask yourself this question.  Who is the antagonist?

At some point in this month every parent of a child in the public school system may find themselves scrambling to figure out what to do with them, as the various teacher’s unions threaten strike action.

I find this deeply frustrating on several levels.  As a parent, I am concerned that my children will suffer from this action.

Ken Coran, the president of the Ontario Secondary School Teachers Federation, says that he is  “very hopeful that the public will see that we are trying to do what is best for the students,” but I find it hard to see how stopping classes, field trips and extracurricular activities is ‘best’ for students.

As an Ontario citizen, I’m frustrated with my government.  We expect a number of things from our representatives, one of them being to provide a comprehensive education system for our kids.  My MPP, Rod Jackson, does not seem to have any useful information on his website regarding the labour dispute.

More than anything, I, and the students I have spoken with, are frustrated by the lack of clear communications.  We would like it if all parties could state their positions clearly, without demonizing their counterparties.  If the government, the teachers, and the unions truly have the students’ best interests at heart, they will work together productively to resolve this issue as soon as possible. 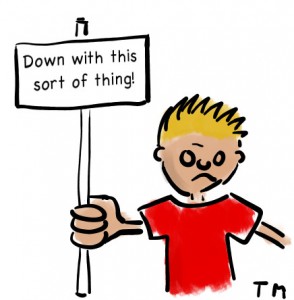 The word economics has its root in the Greek word oikonomos – one who manages a household.  So economics is the study of how we manage our resources – individually, communally, locally and globally.

Our dominant paradigm is that of a market economy.  This is one of the staggering intellectual achievement of the last few thousand years.  I believe that a market acts as a distributed system for deciding how labour is allocated.  Unlike a centrally governed economy, in a market-driven economy the decisions about what to grow, what to mine, what to build and what to sell are decided by overall market sentiment – fundamentally, what people are willing to buy.

This has some major strengths.  No one individual or computer needs to calculate all the needs and requirements for the population of an entire country or an entire world.

It has its flaws too, which I intend to explore further in future articles.  Most critically, I feel that the market economy under prices the long term costs of resource extraction.  Consider an example.

I decide that I want to eat shrimp, so I go to a seafood restaurant and order some.  So do lots of other people.  As a result of the increased demand for shrimp, more restaurants are built.  The price of shrimp goes up.  Sensing an opportunity, a shipyard builds more trawlers, and more shrimp are caught, meeting the market demand.

So far so good.  But as a result of the extra trawling, the sea-beds are stripped bare, ecosystems are destroyed, other fish are caught up and killed by the nets.  The market system has worked perfectly, but we have failed to take into account the long term costs of our actions.  My grandchildren may never get to eat shrimp, if all of them are harvested now.

So what do we do?  What does a stable, sustainable, global economic system look like?  I have a feeling that it would have many of the characteristics of the existing market system, with a few key changes made.  Perhaps we come up with a way to accurately price in the costs of our actions.  Perhaps we change our concept of ‘value’ to take on a broader meaning.

Perhaps we start by asking – what are we trying to achieve in the first place?

The Expulsion of the Money Changers 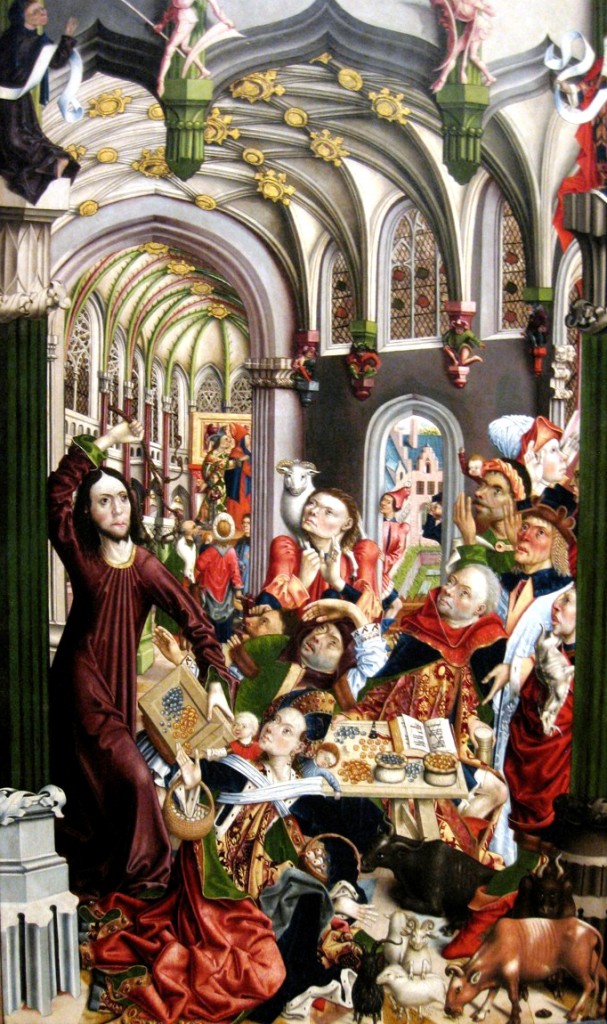 We found this gem when we visited the Art Gallery of Ontario the other day.   Painted by the bizarrely named ‘Master of the Kress Epiphany’, it is profound, disturbing, theologically challenging and politically dangerous.

The title of the work is “The Expulsion of the Money Changers”.  But it’s clear that the money changers in questions are not being expelled from a Jewish temple but from an ornate gothic cathedral.

Several things struck me about this work.  First, the odd use of perspective.  There are several different vanishing points in the image, which the brain can’t really reconcile.  So before the viewer has even taken in the picture, they have this disturbing sense that something is wrong.

Secondly, the sheer guts of the artist to create it.  When it was created, in the late 15th century, the institutional church was the main patron of the arts, and the sale of indulgences was rampant.  The artist took a huge risk in so directly and obviously drawing a parallel between the cardinals and the money-changers that Jesus opposed.

Thirdly, the willingness of the artist to tackle a political hot-potato.  In the modern art wing of the AGO are some very creative, interesting pieces, but the questions they ask are safe, tame ones, such as ‘what is the nature of perception.’  We need art that is not afraid to ask profound, disturbing questions about power, about politics, about money, and about religion.