If we are looking for a classic example of the conflict between modernism and pre-modernism, we need look no further than the Galileo affair. The conflict between Galileo and the church authority dramatically illustrates the tension between two different ways of assessing ‘truth’. 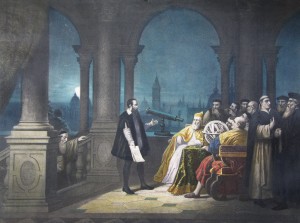 It’s a fascinating story with all the elements of a gripping novel. Colorful personalities, political intrigue, the misunderstood genius facing down powerful forces arrayed against him, and culminating in a thrilling courtroom drama.

In 1616 Galileo was ordered to stand trial for heresy by the Inquisition. He was accused of ‘having held the opinion that the Sun lies motionless at the centre of the universe, that the the Earth is not at its centre and moves, and that one may hold an opinion as probable after it has been declared contrary to Holy Scripture.’

Galileo held his position because of the observations he had made through his telescope. His accusers did not need to look through a telescope themselves to prove him wrong; because their conception of Truth was different. They needed instead to appeal to authority. Their scriptures indicated that the Earth was stationary, and the Pope had banned Galileo’s book. Therefore the matter was clear. Galileo was guilty.

This trial was not really about Galileo, or about telescopes or astronomy, but about worldviews. Was Truth something to be acquired by observation, or by declaration? Were people to trust their senses or trust their leaders? And when the two came into conflict, which side would dominate?

Galileo lost his trial, and was sentenced to house arrest for the rest of his life. But this was the beginning, not the end, of the modern era. Other challenges to Revealed Truth would soon arise. The idea that authoritative truth claims could be questioned, tested, and even rejected if they failed to match up to observed facts would rapidly spread.

The dramatic shift from pre-modern to modern thought has it’s roots, I think, in the Enlightenment. Francis Bacon (friend of Queen Elizabeth I and King James I, Attorney General, Lord Chancellor, lawyer, philosopher, author, scientist, and all-round overachiever), started his book “Novum Organum” with the following aphorism:

Man, being the servant and interpreter of Nature, can do and understand so much and so much only as he has observed in fact or in thought of the course of nature. Beyond this he neither knows anything nor can do anything.

In other words, we know about stuff we can experience.

But Bacon is saying “no, the only way we can know things is through empiricism; through direct experience, through our own senses and observations.” And the implications of this are clear. If the hierarchy claims one thing, but we observe a fact that contradicts their claim, then they must be in error.

We’ll see how this conflict between revealed truth and observed truth played out most clearly in my next article, when we turn our attention to Galileo.

I believe that one can trace a very logical historical path from the rise of modernism through to the development of postmodernism. However, I probably won’t keep these article in strict chronological order. Be prepared for me to hop and skip around!

Before I can talk about postmodernity, I need to establish where we’re coming from. And this means talking about the successes of modernism.

I mentioned in my introduction that I see the the Swedish company Ikea as representing the epitome of modernism. Ikea manages a seamless blend of form and function to channel the individual desires of millions of people into achieving the goals of the company.

This is ne of the greatest achievements of modernism: the ability to create large scale organisations dedicated to achieving a single goal.

Consider, for example, Henry Ford. Before his company revolutionised the industry, cars were manufactured by hand. With the introduction of the assembly line, each component was constructed or attached by one individual or team. The workers didn’t need to know how to build an entire car, but just how to do their assigned task over and over again. The efficiency gains were staggering. While a car had previously taken more than 12 man-hours to assemble, now it could be done in a mere ninety minutes.

But interestingly enough, the history of the production line goes back a long way before Henry Ford. In the early 19th century the British Navy needed to make over 100,000 wooden blocks a year to equip her ships, and all of them needed to be manufactured by hand by craftsmen. This process was dramatically overhauled by Marc Isambard Brunel, who designed a series of steam powered machines, each of which could perform one element of the block-making process. When working together, and operated by relatively unskilled labour, blocks could be manufactured with significantly improved quality and speed. This was the first production line in England, although the concept did not spread to other industries for decades.

The key features of this system, as with Ford’s, were a carefully designed manufacturing process and the assignment of simple, repetitive tasks to unskilled, interchangeable workers.

The other pioneers of this approach were armies. Prior to large corporations, armies were the only structure that organised on this scale, and with the same features. Armies have a hierarchical command structure, a single purpose, and make heavy use of interchangeable, low value units. Military education is a machine for producing soldiers. The individual soldier in a war does not need to see the big picture, or understand strategy, but merely needs to perform their assigned task correctly and efficiently. And if one, or a hundred, or ten thousand are killed, then they can be replaced with identically trained units. To the General, there is little difference between an infantryman and a gun carriage. I think of Napoleon as one of the foremost proponents of this approach, with his Levee en Masse, a startling ability to raise, train and equip vast armies, with which he could overwhelm the smaller professional armies of other European states.

These are some of the key characteristics of modernism: carefully designed processes, efficiencies of scale, and the use of interchangeable workers. And these characteristics were so successful that in the 20th century they spread out of the factory and into the office, the store, and the restaurant. Consider your local Tim Horton’s franchise, for example. Every Tim Horton’s in the country follows the same process for preparing a ham sandwich; each step has a fixed number of seconds allocated, and these times are printed directly above the food preparation area. A franchise, at it’s heart, is a set of carefully designed processes that can be run by interchangeable staff with minimum training.

These economies of scale have brought us affordable cars, quick service at the coffee shop, and many other impressive achievements. Killer diseases such as smallpox were eradicated through large scale, efficient vaccination programs. The introduction of city-wide sanitation infrastructure in London in the 19th century dramatically curtailed incidences of Cholera. And the Prussian education system, which emphasises a standardised curriculum and teacher training methodology, has been adopted worldwide.

So although in later articles I will outline modernisms darker side, I want to make clear that I do not see it as ‘bad’ or ‘good’. It is at it’s core a set of organisational tools. What we as a society choose to do with these tools is up to us.

This month I’ll be starting a new series exploring modernism and postmodernism.

Le Corbusier, a famous modernist architect, said that houses should be ‘machines for living in‘.

The swedish company Ikea I believe has applied this exact same philosophy, and created a ‘machine for shopping in’.

I love the Ikea experience, in part because of the fascinating way that the company has taken the idea of a production line and applied to it to retail. Just imagine your last trip to the store. You arrived in the front door, dropped your kids of at the Småland and then were guided carefully along a pre-planned route, following a pattern designed and refined from uncounted time-and-motion studies. Every corner, every display, the length of time taken to walk through the store, has been planned to make parting with your money as comfortable for you as possible. And even though you came in to just pick up a few dish towels you walked out 2 Billys, a Duktig and a Skärpt.

However, if I’m really looking for a bargain, I don’t go to Ikea. I turn to Freecycle, or Kijiji, or eBay. In these environments, the distinction between vendor and consumer is much more blurred. I might be selling a couch but buying a bike. I’m not dealing with a single efficient corporate entity like Walmart, but an uncountable number of individuals. The experience is less organised, less controlled, more inter-connected, and perhaps more chaotic.

If Ikea represents the pinnacle of Modernist design, then I expect that decentralised internet marketplaces may be the post-modern equivalent.

Postmodernism recognizes that there are many different perspectives on the world, so rather than trying to present formal definitions of these two philosophies, I’ll instead be taking a meandering journey through my own observations. So, first some characteristics.

Characteristics of modernism and postmodernism

So, I have a lot of ground to cover. In the coming months, I hope to at least touch on: the Enlightenment, Francis Bacon, the Industrial Revolution, Henry Ford, the production line, the rise of modern sanitation, healthcare and education, Newtonian physics, the Ultraviolet Catastrophe, determinism, thermodynamics, the Holocaust, quantum mechanics, Schrodinger’s cat, chaos theory, Kurt Godel, modern architecture, Le Corbusier, Conway’s ‘game of life’, the Toyota Production System, the concept of ’emergence’, and probably quite a lot else.

In doing so, I hope to demonstrate how Postmodernism isn’t ‘anti-modernism’, or a passing fad, but rather a logical and inevitable consequence of modernism.