Sound and Fury, Signifying Not as Much as it Could

Just watched The Hobbit/Battle of Five armies, and have fairly mixed feelings. On the one hand it’s a stunning technical and visual achievement, and a number of actors put on excellent performances, but on the other it’s let down by what I feel sure is a flawed screenplay.

I can’t yet put my finger exactly on what I find weak, but part of it is that the story doesn’t know what it’s trying to achieve. Tolkien, I believe, always wanted to explore the boundaries between the known and the safe on one hand, and the unknown, wild, and dangerous on the other. From the very earliest stories he wrote – I guess Tuor and His Coming to Gondolin and Earendil the Mariner, he wrote stories about ordinary characters encountering the extraordinary.

To a certain extent Jackson achieves this – Freeman plays an excellent Bilbo, thrust into a tale of dragons and elves and orcs, and yet in this, the third of an overly-stretched trilogy, Jackson seems to lose his way. It feels as if he’s trying to cram in every last CGI technique that he has left to him before he leaves the world of Middle Earth forever, and so rather than narrative arc or character development we’re presented with a never ending series of over-the-top battles. Bats swarm in the sky, man-bears jump from eagles, Elves defy the laws of physics, every warrior throws himself at his foe with no sense of self protection, huge set piece battles are frequently interrupted with individual interactions, while one assumes the armies in the background simply take a breather and wait for the main action to be resumed.

Bard alternates between acting as an excellent general and abandoning his post to chase down his children. We’re warned in dire tones of a ‘second army’ emerging from Gundabad, but they never really seem to show up.

Frankly, the whole thing leaves me longing for the Peter Jackson who created The Fellowship of the Ring. That movie also had its share of spectacle – Gandalf’s battle with the Balrog, and the battle of Dagorlad in the introduction, for example, but the characters and the source material were treated with more respect.

Perhaps the fundamental difference is this. In Fellowship, the spectacle served the narrative, but in Five Armies, the spectacle, the CGI, the endless fights, became an end in itself. In an era when computers allow us to portray pretty much anything we can dream up, the question for any movie maker becomes not what can we do, but what should we do?

Or to put it more simply – just because you can, doesn’t mean you should. I’m left at the end of the movie hugely impressed with New Line Cinema’s props, casting, sound recording, scoring and visual effects, but uncertain as to what story they were actually trying to tell. 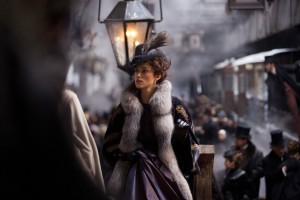 I finally got round to finishing Tolstoy’s epic novel Anna Karenina.  I can hardly do it justice in a single post.  It’s a stunning piece of work, with enormous scope, although very different in focus than War and Peace.

Tolstoy’s earlier work covered grand themes – the Napoleonic wars, the intrigues of kings and generals, invasion, devastation, and the climactic battle at Borodino. Anna Karenina, in contrast, focuses on intimate details of the lives of a group of Russian minor nobility.  They talk, they fight, they fall in love, they misunderstand each other, they argue about politics.  Some search for significance in work, or in religion, or in social enterprise.  All are self-centred to a greater or lesser degree.

Strangely, Anna herself is probably the least developed character in the book.  She is quite deliberately presented as having no redeeming features other than her beauty and charm, and no goal in life other than her own happiness.  But against the backdrop of her intense love affair, her friends and relatives all go through their own crises, and all change in one way or another.  And behind all this we are given a vividly detailed view of Russian life in the 1870s.  Trains and telegraphs are beginning to replace horses and letters.  The nobility continues to attend endless streams of operas and races and social functions.  Intellectuals wrestle with the new ideas that are sweeping Europe – new forms of art, new forms of government, tensions between liberals and conservatives, discussions about the role of the church and the state, or the relationship between the mind and the body.  Discussions that frequently feel startlingly relevant to today.  And in the background,  80 million peasants work the Russian soil, mostly oblivious to the social upheaval that is stirring around them.

Throughout the whole book, Tolstoy gently satirises artists, politicians, fashionable society, and even himself, through the character of Levin, who is obviously an author stand-in.  In fact, by the end of the book you realise that it is far more about Levin and his family than it is about Anna.  To a large extent the book serves as a vehicle for Tolstoy to express his observations on the society around him, and explore his own changing convictions.  The last section, in which Levin and his brother discuss how easy it is to manipulate society into wanting to go to war, clearly anticipates his later work, The Kingdom of God is Within You.  A book which, along with those by Clausewitz and Sun Tzu, I consider one of the three most important books on war ever written.

Anna Karenina was adapted into a movie last year.  I can’t imagine how they manage to cram the scope of this vast novel into two hours – I suspect a miniseries at least would be needed to do it justice.   It is, of course, a book of daunting length.  But I thoroughly enjoyed all the time that I spent with it.