Machines for Working In.

One of the pioneers of Modern architecture, Le Corbusier, once famously described the house as ‘a machine for living in.’ 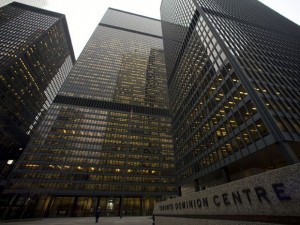 The worst working experience of my career was located in a Mies building. Located in central Toronto, it is a complex that represents to me the pinnacle, or possibly the nadir, of modern architecture. Every day I would arrive at the facility, take the elevator up to the 20th floor and swipe my pass card to be allowed into the cubicle farm.

This was just one floor.  Above me, below me, identical farms of gray boxes, stretching up to the 56th floor.  One of those floors, the executive one, had mood lighting, but the rest were illuminated by fluorescent strips.

The nature of my work here is fairly irrelevant, and would have been completely forgettable if the words ‘Mortgage Backed Securities’ hadn’t implanted themselves in the public consciousness a year later during the financial crisis.  But it was the working environment itself that had the biggest impact on me.

I’ve long been convinced that our environments, our spaces, dictate how we work and how we think.  We think about God differently in a vast Medieval cathedral than in a strip-mall chapel.  We think about romance differently beside a canal in Bruges than stuck on the TTC in a snowstorm. And where we spend our working lives has an impact on how we think and what we achieve.

I found the Mies van der Rohe the most stifling environment I’ve ever been in.  The very nature of the cubicle farm, its ‘machine’ like nature, tends to make people feel like redundant, replaceable cogs.  To think freely, to question the system, to consider new ways of doing things, becomes intensely difficult.  The most frequently heard phrase I heard from co-workers was ‘it is what it is’.   The tasks being performed might have been mundane, boring, or difficult.  But it is what it is, we cannot change it.

I would come home every night in a foul mood, and take out my frustrations on my family.  I know now that I am a creative worker at heart; I work best when faced with an interesting problem, an idea that hasn’t been implemented before, a bug that no-one else can resolve, a new approach to performing an old task.  To work in the giant gray cube was to suffer an unbearable tension between who I was and what I was expected to be.

I lasted six months; then one morning I walked out and never went back.  The next few months were challenging, with uncertainty about the future, and about finances, but I never regretted leaving behind the Machine for Working In.

Machines are things, and we use them.  But people are people, and we should value them as unique, individual, divinely created beings.  And we should be wary of spaces that push us into thinking otherwise.

I have a vision.  A vision for a new approach to engaging in democracy in Canada.  One that draws its inspiration from the amazing collaborative achievements of the internet age such as Wikipedia.

I am a firm believer in representative democracy.  The idea that governments are fundamentally answerable to the governed is perhaps the greatest intellectual achievement of the last 1000 years.  However working out the implications and implementation of this idea is still an ongoing project.  However with the rise of the internet we have been given another powerful tool that can be used in service of democracy.

First, I think that there is a fundamental flaw to the political dialogue of the country.  And that flaw is that we consider POLICY to be the most important topic of discussion.  However when considering a candidate for government there are two traits that have to be present before we should even begin to consider that candidate’s policies.

These traits are integrity and competence.  The reasons should be obvious.  Imagine a candidate, let’s call him Bill, is standing for a municipal counsellor position.  Now Bill has sent out flyers around his neighbourhood, and we like his policies.  Perhaps he’s in favour of more traffic calming, or infrastructure investment, or lower taxes, or attracting businesses to the city.  However, all this is completely irrelevant if he lacks the above mentioned qualities.

If Bill has no integrity, then there is no value to his campaign promises.  Perhaps he has no intention of following up on what he has said.  Maybe he’s just reciting the phrases that he feels will get him elected, without ever meaning to actually implement his policies.

Likewise, even if he has the best intentions, if he is not competent, then he will not be able to enact his policies.  Perhaps he has no administrative experience.  Perhaps he is hopelessly disorganised.  Perhaps he is unable to work in cooperation with the rest of the city council.  Even though he promised to sort out the cities traffic problems, it turns out that he has no idea how the municipal budgetting and planning process works, and is unable to deliver on his promises.

Now to a certain extent our political system addresses the second concern.  By the very fact that they have managed to get themselves elected, a councillor has demonstrated that he is capable of at the very least running an election campaign, budgetting for lawn signs, turning up for and engaging in debates and so forth.  But it makes very little provision for the first concern – is our candidate a man of integrity?

The electorate, then, faces a very similar problem to that of the HR department of any corporation.  The HR department has roles that in needs filled, and it needs to find individuals with both the skills to perform the job and the integrity to work for the best interest of the company.

In both cases, really the only tools that we have for judging an individuals integrity is his past behaviour.  If someone has practiced deception, corruption, nepotism, misuse of resources etc. in the past, then it’s not unreasonable to expect this behaviour to continue in the future.  Likewise, if an individual has shown themselves to act honestly when given a small amount of responsibility, we feel comfortable entrusting them with greater responsibilities.

Large enterprises, to greater or lesser extents, have mechanisms in place to assess these traits.  In a well run company, or volunteer organisation, or military regiment, or sports team, an individual who demonstrates competency at his assigned task and integrity in his dealings is recognised and given greater opportunities.

I fear that our political systems sometimes lack these mechanisms.  In the electoral system we have the tools to appoint or fire individuals, but the actual assesment of the behaviour can be very haphazard.

Generally speaking it is seen as the role of the press to keep us, the electorate, informed of the behaviour of our representatives, but the information we are given tends to be skewed towards the ‘big story’.  Major policy announcements, or major scandals, are covered, but we are not given comprehensive coverage of all of those who are working for us in government.

Consider this.  I am represented variously by a Ward Councillor, by a Mayor, by a member of Provincial Parliament and by a member of Federal Parliament.  These individuals in turn appoint cabinets and committees, and are responsible for allocating the resources of the various taxes that I pay. Now, I know who these individuals are, but beyond that, what can I tell you about them?  Can I tell you whether Jeff Lehman is a man of integrity?  Is Patrick Brown a competent adminstrator?  Does his track record indicate an ability to plan well, to estimate costs accurately, to work with his colleagues to complete tasks?  Does Alex Nuttal keep his promises?  If he says that he’ll do something, can we trust that he will?

I think that these questions are of more fundamental importance than party affiliation.  I’m coming to the conclusion that it makes more sense to vote for an individual who’s political orientation is the opposite of your own but who you judge to be competent and honest than a member of your preferred political party who is either corrupt or incompetent.  Surely the former is actually more likely to represent your interests than the latter.

As the electorate, we are the country’s HR department.  We are responsible for choosing representatives to competently and honestly run local, provincial and federal goverment.  As such, we have the same responsibilities as an HR manager – to objectively evaluate a candidates ability to perform the task and the likelihood of them undertaking it in an honest manner.

Given this, what questions do we need to answer for every candidate?  If we were designing an HR evaluation form for all levels of goverment, what would it look like?  How would we mark our representatives and candidates on their ability to execute and on their integrity?  And how could we do this in an objective manner, applicable across all levels of goverment, across every province, and in a manner unbiased by party political affiliations.

In my experience in job interviews, the most useful answers are very concrete.  Saying ‘I am a team player” doesn’t tell the interviewer anything useful.  Giving specific examples of how you have worked in concert with others to achieve a goal is vastly more helpful.  So with that in mind, what concrete questions could we ask of candidates?

At the moment I only have some suggestions, and would love to hear others.  For example:
Competence


Imagine that we could write an HR evaluation form as outlined above.  And then imagine that in the manner of wikipedia we could get it filled in and kept up-to-date for every municipal, provincial and federal politician in the country.  Remember, once again, that this wouldn’t address political affiliation or policy positions, but solely the integrity and competence of our representatives, with every effort made to be as neutral and objective as possible.

Is this possible?  Many Canadians know what it’s like to perform a quarterly or yearly performance review, so why not apply this to government?  The nice thing about this is that we can start small – setting up a wikipedia style site and beginning the review for a few politicians shouldn’t be hard.  We have an electorate of millions of people, all of whom have a vested interest in the actions of government.  Can we find enough people to hold responsible those who make decisions on our behalf?