I’ve been thinking a lot about the concept of hope.  It’s one of my key values.  And yet I find that hope can be a very esoteric concept.  It’s not something I find easy to define.

With that in mind, I’m going to start writing about some people who’s lives have inspired me.  People who have acted as if it is possible to make a difference in this world.  People who have used what they have to affect the situation they found themselves in for the better.  People who have creatively imagined a better way of living. 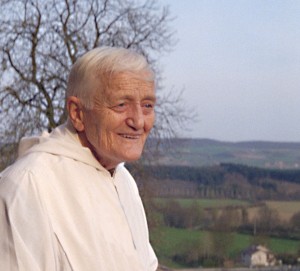 I’ll start with the fellow on the right, Brother Roger.

You can’t spend a long time in the Christian world without noticing that sometimes we don’t get on all that well with each other.  Since the Great Schism the Orthodox and Catholics haven’t exactly been on speaking terms, and since the Reformation, Protestants and Catholics have been refusing to play nicely together.

We are forbidden by our leaders from sharing communion together, and have been for hundreds of years.

Except for one man.  Brother Roger, above.  He founded the Taize community in France, and spent his life working towards Christian reconciliation.  His work was so impressive, that despite being a Protestant he received Catholic communion from two Popes.

Every year Taize hosts thousands of young people who want to reach across cultural and denominational boundaries, and many thousands more have been blessed by the music and simple liturgical style that the community inspired.   In the words of the current leader, Brother Alois:

“In Christ we belong to one another. When Christians are separated, the message of the Gospel becomes inaudible.

How can we respond to the new challenges of our societies, notably that of secularization and of mutual understanding between cultures, unless we bring together the gifts of the Holy Spirit placed in all the Christian families? How can we communicate Christ’s peace to all if we remain separated?”

The need for reconciliation is becoming clearer to me as I travel around the Barrie churches, and I can think of no one who embodies this ideal better than Brother Roger.