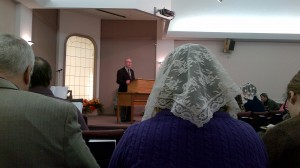 I came to Northside Bible Chapel perhaps a little more prepared than for some other denominations that I’ve visited so far.  Churches with the phrase ‘Bible Chapel’ in their name tend to be part of a lose knit denomination known as the Brethren.  My family has strong Brethren ties, I spent several years attending a Brethren church in Mississauga, and my wife and I were married in a Brethren church in Oakville.

There are several elements of Brethren practice and theology that I appreciate.  Perhaps foremost is the idea of the “Priesthood of Believers“.  This, quite simply, is the idea that a follower of Christ is meant to be more than just a consumer of religious goods and services.  They are all meant to be active ministers in whatever capacity God has gifted them.  In the Brethren church this is seen partly through the absence of a formal clergy.  Services are conducted by the laity, and in some services the floor is open for any participant to contribute a thought, a song or a prayer.

The other element of Brethrenism that I’ve always liked is the centrality of the shared meal.  They tend to celebrate communion every week, and much of their community life is built around eating together, potlucks, fellowship lunches, breakfasts and so on.

This focus on community was evident at Northside this morning.  Many people welcomed us when we arrived, and most of the announcements were devoted to various community events: Bible studies, men’s breakfasts, birthdays and celebrations.

If I was a complete outsider, a couple of impressions would have struck me.  Firstly, this is clearly a very conservative denomination.  The majority of the women present wore head-coverings during the service.  Nearly everyone had a bible open on their lap during the sermon, with the pages rustling every time the preacher mentioned a new verse, and the sermon contained strong warnings against associating with the ‘wrong’ type of person.

The second thing you would notice is that this church really, really cares about soteriology. the doctrine of salvation.  A strongly Calvinist view of sin, repentance and heaven was repeated probably 10 or 15 times in various ways during the service.  As it says on their website, doctrine is important to the congregation of Northside Bible Chapel. I get the feeling that they see their purpose as deducing correct doctrine and then propagating it to those around them.

In every church I’ve visited I’ve asked the question ‘What is God doing in this city?’  I’m afraid I came away disappointed by Northside on this front.  Although they clearly have a warm internal community and are well connected to other Bible Chapels in Ontario, they were the first church who couldn’t comment on any external connection to the broader church in Barrie or the broader city in general.  This lack of connection unintentionally weakens both Northside and the rest of the Church in the city.